Inflatable Stage props or Inflatable sets are a great way to get a UNIQUE one of a kind design in front of a HUGE audience.

From Katy Perry to Bon Jovi, inflatable stage props are a way to creatively add to any concert or music festival. Our inflatable stage props are a perfect way to design something that is out of this world to surprise your fans. We can help you design the most amazing stage prop with excellent customizable detail for your next event. This attention to detail can be seen in the pictures to the right! For example, the Foster the People stage set includes inflatables that are accurate replicas of the characters on their “Torches” album cover. This brought their album to life and set the atmosphere they wanted for their fans! In addition, Travi$ Scott’s iconic Astroworld album art is centered around an inflatable replica of Travi$’ head. The inflatable is carefully created to be accurate and artistic at the same time, and does so very successfully. There are many other examples of the Inflatable Design Group Team’s attention to detail in creating custom inflatables, so feel free to check out more of our stage set products!

Special provisions can be made with the inflatable to inflate or deflate giving the inflatable stage props a great added value to exit or enter the stage.  Want to wow your fans? Add lights or smoke to your Inflatable Stage prop. Extra items can be added to give this a truly one of kind inflatable. As you can see, the lights and smoke increased the excitement that the giant inflatable dragon brought to the Forbidden Kingdom music festival. Inflatable Design Group created this inflatable for the 2019 event according to the mythical story that is connected to the event. The dragon in the story was brought to life by our talented IDG team! It was a huge hit, leaving fans amazed. For your next concert, don’t miss out on the opportunity to wow your fans with a custom inflatable stage prop from Inflatable Design Group!

In addition to the impressive inflatable stage props, IDG has awesome inflatable sets! These sets include interactive products like the castle-like facade seen in the picture to the right. Inflatable Design Group can create a customizable inflatable that will produce your desired atmosphere. Feel free to check out the other examples and remember that you can contact us for a free estimate!

Another positive is the ease of transporting the unit once it is deflated. Inflatables are very light weight compared to other heavier pieces that have to be dismantled or broken down. However, this does not mean that IDG’s inflatables lack quality. in fact, the opposite is true! Over the past 25+ years, inflatable Design Group has built up a reputation of high quality, durable products that last for years! So, you can trust that an IDG inflatable stage prop will entertain crowds for many shows to come!

Inflatable Design Group can design and manufacture an Inflatable Stage Set that will impress the fans!

Check out some of these fabulous artists that have used our inflatables! 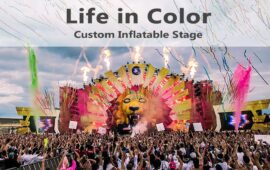 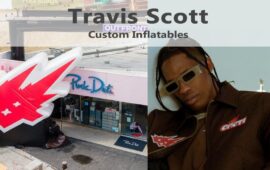 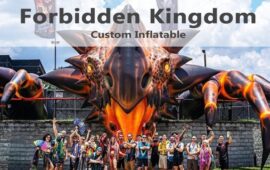