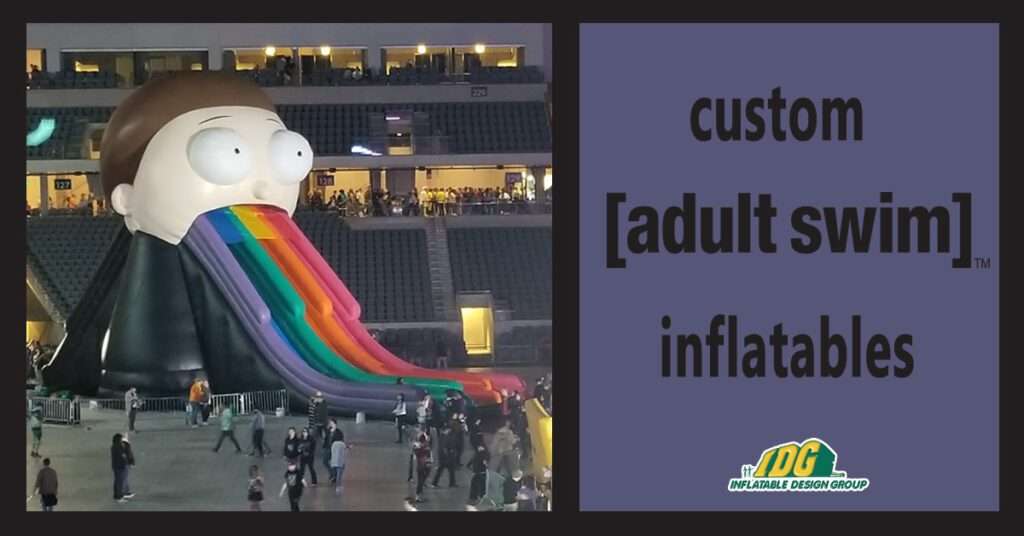 IDG has had the pleasure of working with Adult Swim many times over the years to create custom inflatables for the popular tv network.  These custom Adult Swim inflatables have been used at various Adult Swim festivals, events, and promotions.

For Adult Swim Fest 2019, IDG worked with the tv network to bring to life one of their most popular characters, Morty.  Morty, from the tv show Rick & Morty, was transformed into a giant three-lane rainbow inflatable slide.

This inflatable slide towered over eventgoers.  It provided fans of the tv series with a fun and unique experience that allowed them to connect with one of their favorite cartoon characters.  You can read more about the Morty Slide here.

IDG has also created custom Adult Swim inflatables for Comic-Con.  Adult Swim always goes all out at Comic-Con.  Their booth is so large that it takes up a whole parking lot across the street from the San Diego convention center and is a whole event on its own.

The Fun House was such a hit that Adult Swim took it on the road and toured around the country to various universities, which was easy thanks to the front structure being inflatable!

Looking for creative ways to advertise your new show, new product, or business?  Contact our team at info@inflatabledesigngroup.com today!  Our creative team can turn virtually any design into an amazing, highly detailed custom inflatable.

Comic-Con International is set to take place in July 2022 which is only a few months away.  Contact our team today to start preparing and designing your custom inflatables!