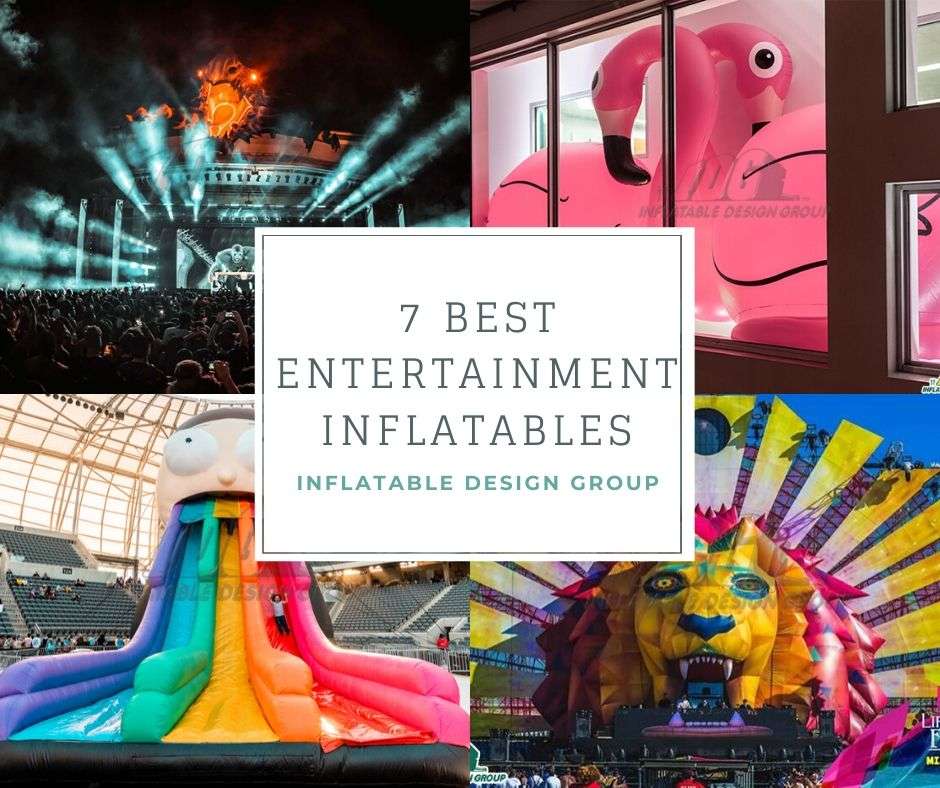 7 Best Entertainment Inflatables of the Decade

At the seventh spot is a life-size inflatable Battle Bus from the popular video game, Fortnite. In the battle royale style FPS game, players begin each round flying above the map in a “Battle Bus”. So, as Fortnite became more and more popular, the bus became iconic. The entertainment inflatable featured at the 2019 E3 Expo in Los Angeles as part of Epic Games’ presentation. Therefore, fans of the game felt like they were really in the game! We created the bus to look exactly like the one from the game, and even made it life-size! So, the Battle Bus served as an effective addition to Fortnite’s booth. It attracted fans from all over the event, towering above everything else. A custom entertainment inflatable creates interest in your presentation and boosts your brand. Check out more Fortnite inflatables and other custom products on our Custom Shapes page!

Number six features an exhibit in the popular Bay Area art installation called the Bedford Gallery. The talented artists here at IDG created multiple large inflatable flamingos. These flamingos were carefully positioned inside a room where viewers appreciated the art through large windows. Most people think of children’s birthday party bounce houses when they hear “inflatables”. So, Inflatable Design Group rewrites that assumption with inflatables as art installations! For more exhibits and examples, check out a recent blog written specifically about inflatable art! IDG is known for its custom inflatables, so contact us for a free estimate on your next entertainment inflatable!

Sliding in at the fifth spot is a GIANT inflatable Morty slide made for the Adult Swim Festival in November! Rick and Morty is one of Adult Swim’s most popular shows and a new episode was being aired at the festival. So, to increase the hype for the show, IDG created a 30+ foot tall multicolored slide with Morty’s head at the top. As you can see, participants climbed up from the back and slid out of Morty’s mouth, picking up some sweet speed down the steep slide. So, kids and adults alike lined up to experience the inflatable fun zone! The Morty slide became a hit because it both added a fun experience and a hilarious view to the festival. Therefore, anything is possible with the talented artists here at IDG!

At number 4 is a terrifying, giant fire-breathing inflatable dragon looming over Florida’s Forbidden Kingdom Festival stage. The bass and dubstep music and arts festival includes more than just headbanging drops. According to their website, the festival creates a story, a “Forbidden Tale” that paints a fantasy picture of the Forbidden Kingdom, complete with characters and a plot written by Joshua Dean Perry. Also, the website provides a description of a major character – the dragon. It reads, “The Dragon is Forbidden Kingdom’s oldest and most powerful inhabitant” (forbiddenkingdomfest.com). So, IDG captured the essence of this dragon with an impressive inflatable on top of the stage. In addition, IDG customized the inflatable to have glowing eyes and bellow smoke out of its mouth. Therefore, this custom inflatable lands a top-five spot on the best entertainment inflatables!

Top three countdown! We have this awesome inflatable lion stage set at number 3 because of it’s brilliant colors and immense size! The lion served as a backdrop for the main stage of Miami’s Life in Color in 2016. As you can see, IDG’s amazing artists designed the lion’s face and mane to include beautiful colors. Also, the mouth opened at the level of the performers. All in all, the stage set added excitement to the show and amplified the concert experience! So, check out this and many other awesome stage sets on our Inflatable Stage Props page. Entertainment inflatables like the Life in Color lion improve the atmosphere of any event! So, contact Inflatable Design Group to get started today!

Another stage set makes it to the number 2 spot. Chris Brown’s Indigoat tour featured a stage set that IDG made from his Indigo album art. As you can see in the collage below, the top left picture is the album cover. Inflatable Design Group’s artists created a giant inflatable banker and bishop. Exemplified in the other pictures, these characters look exactly how they are depicted on the album cover. So, fans at the concert felt like they were a part of the album! Furthermore, the atmosphere of the concert improved as a result of IDG’s inflatable stage set. Custom really does mean custom with us, and anything is possible! Check out our Custom Shapes page to explore more creative ideas and entertainment inflatables!

Here it is. Number one. The BEST entertainment inflatable. IDG created the golden inflatable head of Travis Scott‘s iconic Astroworld album cover and promotion. Famous photographer David LaChapelle shot the album cover with the inflatable head as the centerpiece. If you haven’t seen it, the album cover is the top right photo in the collage below. Furthermore, the photos on the right are from the worldwide promotion campaign for Astroworld. IDG created multiple golden heads to be placed at iconic locations around the US and the world. Pictured are the Paris and Los Angeles locations. In addition, more heads were spotted in Houston, Sydney, New York, and other locations. Travis has since utilized IDG’s resources for more entertainment inflatables to enhance his concert or festival atmosphere. Check these out on our Inflatable Stage Props page and contact us for a free estimate on your very own entertainment inflatables!

So, if you were impressed by these awesome entertainment inflatables, check out many more on our Entertainment Inflatables section of the website! Also, feel free to let us know if you agree or disagree what the best inflatables are on our Facebook page or Instagram! It was difficult to rank these awesome projects because they are all so well done. Here at IDG, we take pride in high quality custom inflatables. Contact us for more information!