All it Takes is One Word

All it Takes is One Word

Inflatable words create brand awareness, inspire action, and advertise with ease! Check out some of Inflatable Design Group’s best inflatable words and logos on this blog and more on our Advertising Shapes and Logos page. Here at IDG, we specialize in custom inflatables. Therefore, any word or logo is possible with our talented team. As you can see, the client’s preferred colors and designs are vibrant and eye-catching! IDG is rewriting the common misconception that inflatables are limited to bounce houses and arches. So, keep reading for awesome examples of inflatable words, letters, and logos!

The talented IDG team created a #VoteTogether inflatable that featured in the Greenville Town Common. Vote Together is a “national campaign to increase voter participation by making voting fun and celebratory” according to their website. Also, Vote Together events include “block parties, BBQs, and parades” that “take place during early voting and on Election Day”. So, Vote Together utilized IDG’s resources to include a large inflatable #VoteTogether logo at the Greenville event. This inflatable added to the atmosphere of the event! The campaign logo became a photogenic inflatable with event-goers taking and posting pictures on social media. In addition, IDG supported Vote Together’s mission of celebrating “civic engagement and the act of voting” with the awesome inflatable. So, inspire action with Inflatable Design Group by contacting us today!

The increasingly popular use of social media to spread information and promote events creates a need for photo opportunities at events. Therefore, IDG is your one-stop-shop for photogenic inflatables! So, check out our Custom Shapes page to see some awesome examples. The inflatable arch below featured at the 2019 Bonnaroo music festival in Tennessee. As you can see, festival-goers loved the opportunity to pose under the Bonnaroo arch. So, just one word on an inflatable is all it takes to create a hit photo spot! Consider Inflatable Design Group for your next event! Just like at Bonnaroo, your attendees will take photos with the cool inflatable. Then, those event-goers will share the pictures on all platforms of social media. This free advertising comes as a result of IDG’s resources, so don’t wait! Call us today for a free estimate!

Sports promotion and inflatables go hand-in-hand. In fact, we have a whole website dedicated to sports inflatables! Check it out at https://inflatableteam.com/! However, in this blog, I’m focusing on the positive impact of inflatable words and letters. For example, the talented IDG team created inflatable letters to promote the Big 12 Conference. The Big 12 is a collegiate athletic conference that includes 10 universities, such as Baylor University and the University of Kansas. So, fans of any of these 10 teams were excited to see the giant Big 12 inflatable letters. Some, like in the picture below, even took pictures with the letters. As mentioned in the paragraph above, inflatable letters like these are very photogenic! So, whatever sport you are involved in, consider Inflatable Design Group for your inflatable needs!

The popular English reggae-pop band UB40 utilized IDG’s resources for a 2019 concert. Inflatable Design Group created giant inflatable letters to stand behind the band. The inflatable letters, as you can see in the picture below, towered over the stage and amplified the atmosphere of the concert. In addition, the letters increased brand awareness for the band due to the pictures and videos posted with the inflatable band name in the background! So, inflatables are useful not just for event promotion but featured on stage as well! Check out some more sweet examples of inflatable stage props on our Inflatable Stage Props page. Contact Inflatable Design Group today to get started on your next inflatable stage feature!

Advertising with inflatables creates excitement like no other. One of the most popular forms of inflatable advertising is a large depiction of the group’s logo or name. Inflatable Design Group specializes in custom inflatables, making any logo, name, or shape possible! For example, consider the inflatable Billboard letters in the picture below. Billboard tracks and records the weekly popularity of songs in and around the United States. Since the 1940s, Billboard has been iconic for its music popularity charts. So, along with the magazine’s rise in popularity, the Billboard font became iconic as well. Inflatable Design Group captured this 2-dimensional font with 3-dimensional inflatable letters. Therefore, Billboard and music fans, in general, experienced the logo in real life and jumped at the opportunity for pictures with the inflatable. The talented IDG team can bring your iconic letters to life with inflatables as well! Contact us today!

For more information and awesome examples of inflatable advertising with IDG, check out our recent blog titled “Be Bold with IDG’s Inflatable Logos and Shapes“. Here is a preview of what the blog includes: 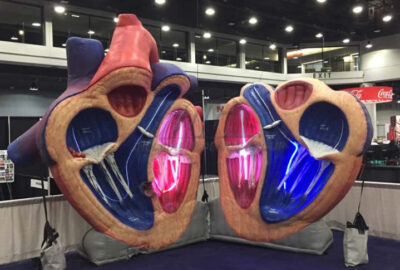 Last month was American Heart Month! So, here at IDG, we support heart-healthy causes in the best way we know how: inflatables! This blog is… 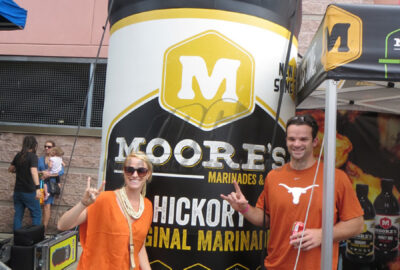 9 Inflatable Product Replicas that Look Just Like the Originals

Check out these incredibly accurate inflatable product replicas by Inflatable Design Group! This blog focuses on food and drink products, so for even more examples… 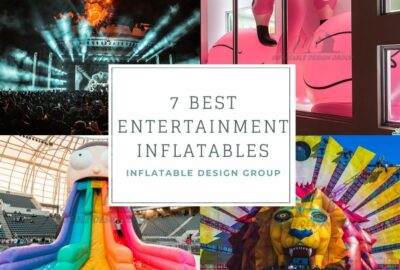 7 Best Entertainment Inflatables of the Decade

Inflatables are becoming an increasingly popular feature within the entertainment industry. Here at IDG, we create custom inflatables to amplify any event! This blog highlights… 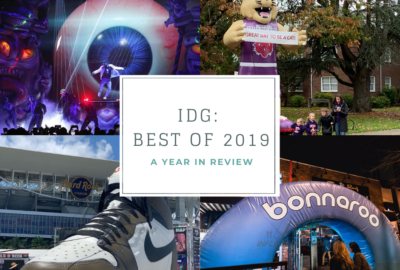 2019 is coming to a close, so we’d like to take you through the past 12 months of IDG inflatables! It’s been quite a year,… 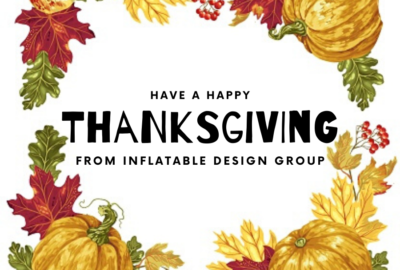 IDG is Your One-Stop-Shop for Thanksgiving Promotion

This Thursday, get thanked with help from Inflatable Design Group! We have everything you need to promote your Thanksgiving products. From turkey inflatables to thanksgiving…