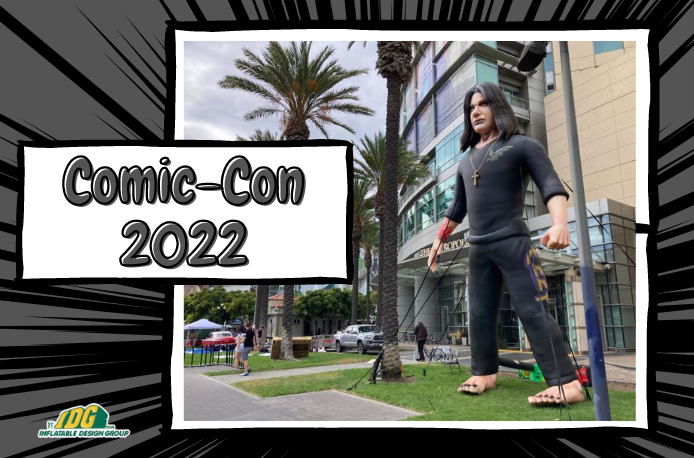 After being on a two-year hiatus, Comic-Con 2022 was back in action in San Diego this past weekend.  Inflatable Design Group was lucky enough to not only attend the annual event but also create multiple custom inflatable creations for the event.

This giant billboard was located on a major parking structure facing one of the main streets in downtown San Diego.  This parking structure is located close to the Convention Center, making it a prime spot for event attendees to view the giant billboard.  The Batwheels logo block’s total dimensions are 4 feet wide, 24 feet tall, and 38 feet wide, making this inflatable hard to miss.

The giant inflatable Ozzy Osbourne was inflated Wednesday, July 20th through the last day of Comic-Con on Sunday, July 24th.  Inflatable Ozzy was located in the back of the Omnia Hotel, across the street from the convention center, welcoming people to the event.  The giant inflatable gave event attendees a unique photo opportunity and could be seen all over social media, making this a successful promotion.

Only at Comic-Con would you ever find Ozzy Osbourne and the Cookie Monster hanging out.

Located right next to the giant inflatable replica of Ozzy Osbourne, was another IDG inflatable, a 30-foot-tall robotic Cookie Monster.

This inflatable replica made an appearance in New York City last month and then traveled to San Diego for Comic-Con.  Custom inflatable replicas pack up small and are relatively lightweight, making them easy to transport or travel with.  IDG uses only the best materials in the industry to create all of our custom inflatable creations so that they will last for multiple uses.

Tuca and Bertie Floating Through the San Diego Bay

Last year, IDG created a giant inflatable floating activation to help announce the premiere of Adult Swim’s cartoon Tuca & Bertie.  This giant activation included inflatable replicas of the show’s two title characters and was sent sailing through the New York City harbor and along the coast of Los Angeles on the weekend of the show’s premiere.

This year, the giant inflatable replicas were back but this time Tuca and Bertie sailed through the San Diego Bay during Comic-Con weekend.

Of course, this giant floating inflatable advertisement was seen by many people and posted all over social media, just like last time.  Find out more about this inflatable floating activation in our Tuca & Bertie Success Story.

All in all, Comic-Con 2022 was a success for Inflatable Design Group.  Our team had a great job working with our multiple clients to bring their creative concepts to life in the form of inflatable creations.

Check out the custom inflatables we have made for Comic-Con in the past on our new Comic-Con page.

Ready to get started on your own custom inflatable?  Email our team info@inflatabledesigngroup.com to get a free quote.