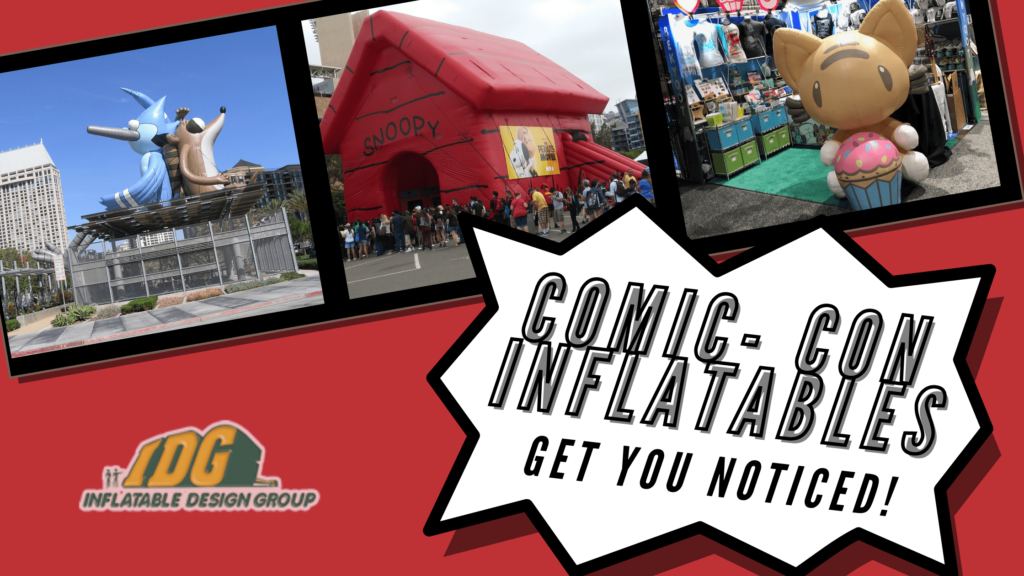 Comic-Con Inflatables Get You Noticed

After a two-year hiatus, San Diego Comic-Con International is returning to downtown San Diego this July!  Be sure to stand out at this year’s convention with custom Comic-Con inflatables designed and manufactured by Inflatable Design Group!

Stand Out and Attract People at Your Comic-Con Booth

Comic-Con is one of the top marketing events of the year for the entertainment and comics industry.  With over 130 thousand individuals attending and over 75 exhibitors, brands must get creative with the way they stand out from all the booths around them.

Tower over the crowd and attract people to your booth with Comic-Con inflatables.  Work with IDG to create an attention-grabbing inflatable in any shape, size, and color you want!  Display your inflatable above your booth, by your booth, or even outside the event to let people know your booth is worth checking out.

Not only do Comic-Con inflatables help attract people to your booth but they also provide a great photo opportunity!  People are sure to stop and take pictures with your custom inflatables and post them on social media, increasing your brand awareness to people who aren’t even at Comic-Con!

Connect with Your Fans with Comic-Con Inflatables

People love seeing giant replicas from their favorite tv shows or comics.  Bring your tv show or comic to life with Comic-Con inflatables!

An example of this is the giant inflatable replica IDG made of the iconic Snoopy’s house from the Peanuts comics and movies.  This giant inflatable structure was used at Comic-Con a few years ago to help promote the premiere of The Peanuts Movie.

Fans of the Peanuts lined up to enter the giant inflatable structure that was set up outside of Comic-Con in downtown San Diego.  Inside, fans were immersed in Snoopy’s world.  This inflatable activation attracted lots of attention at Comic-Con and helped build excitement for The Peanuts Movie premiere which took place a few months later.

IDG has worked with some of the biggest names in the entertainment industry.  We have even created custom Comic-Con inflatables for brands such as Cartoon Network, Hasbro, Adult Swim, and more.  These custom inflatables range from small, sealed units used at event booths to large character replicas overlooking the city.

San Diego Comic-Con International is being held in Downtown San Diego from July 21st to July 24th, 2022.  All though it is hard to believe this is only a few months away!