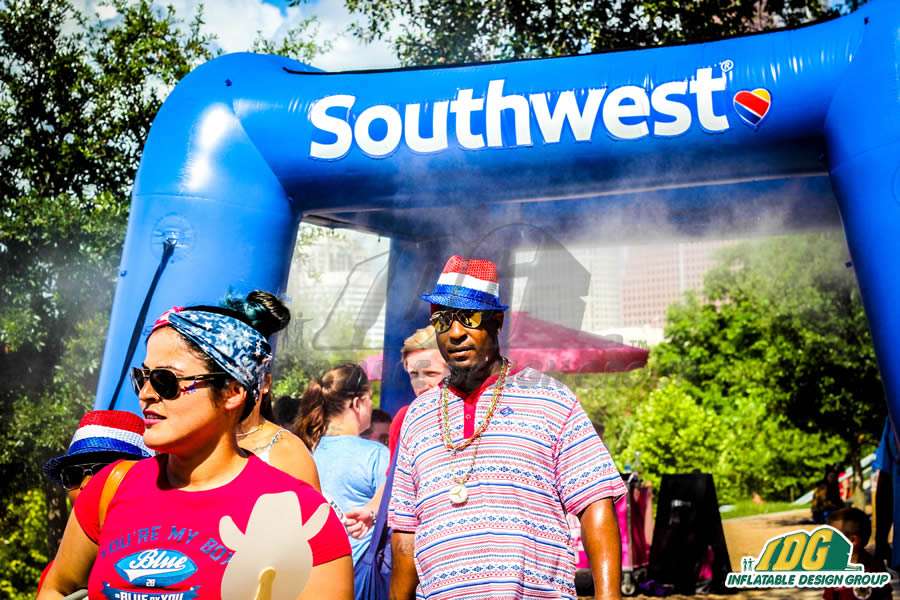 Cool Off With an Inflatable Misting Station

With IDG, you have the ability to customize your inflatable misting station. As you can see here, many have seized this opportunity to advertise on their misting stations! Whether it’s a half marathon or a sporting event, people will be spending time at your misting station. So, make sure they know who’s providing the refreshing getaway from the heat! Your company name, slogan, product, sponsors or anything you want to promote can be on the misting station. Also, these stations are popular photo opportunities! So make sure your logo is in each picture taken and there’s some free advertising!

Take a look at Swisher. A few years back, they launched a national marketing campaign to support its e-cigarette and e-cigar product lines. Part of the campaign was a “Vapor Tour” that included a booth, inflatable misting station, and something like a food truck, but for trying the new e-cigs. The truck stopped in high traffic areas and was displaying and offering products to those who walked up. The 2013 tour occurred from the summer months of July to September, hitting 15 cities from the midwest to the south. That summer was a hot one. It’s always hot in those areas throughout those months, but according to a national climate report, it was hotter than the 20th-century average.

One of the main parts of Swisher’s tour was an inflatable misting station from IDG! As they went from city to city, people in the area were drawn to the refreshing mist to escape the muggy heat. Once there, under the misting station, people are even more likely to give Swisher’s truck a tour. The misting station served multiple purposes; it was a promotional product as it had the e-cigarette line advertised on it. Also, it was a way to keep existing customers there for longer.

The Refreshing Use of Inflatable Misting Stations

Our misting stations have been utilized in many settings; including college campuses, car dealerships, airshows, concerts, running events and others. One specific example is the “Beat the Heat” mile, 5K, 10K, Half and Full marathon event. As referenced by the name, the event takes place in the heat of Springtime in Colorado. The relief from running anywhere from 1 up to 26.2 miles in those conditions can be found in the inflatable misting stations.

As a runner myself, I would like to make a personal comment about the benefit of these misting stations. Years ago, I was running a 3-mile cross country race in high-90 degree southern California weather. We didn’t have a nice inflatable misting station (I wish we did), but what we did have was volunteers on the side of the track with spray bottles full of cold water. They would mist each runner as he or she ran by. I honestly may not have finished the race if those wonderful people weren’t there to cool down my overheating body. I finished the race with a time to be proud of and that memory has stuck with me ever since.

That was only 3 miles, so imagine what those who are running almost 10 times that distance must feel during the race! I can attest to the refreshing feeling of cool mist as one is running a race, so if you are planning a 5K or other running event, definitely consider ordering an inflatable misting station from IDG!

Get Your Inflatable Misting Station Today!