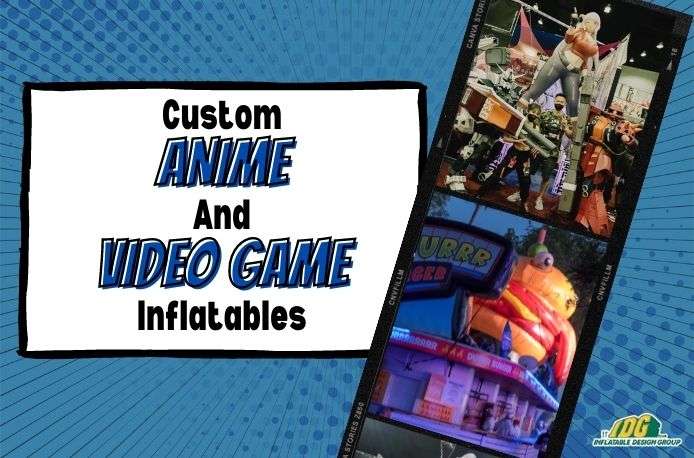 Custom anime and video game inflatables are a great way to get noticed at the next event your brand attends and provide event-goers with a fun photo opportunity.

Anime Expo 2022 took place at the Los Angeles Convention Center from July 1st to July 4th.  The event, which was canceled the last two years, drew in over 100,000 fans and had over 400 exhibitors.

With so many attendees and exhibitors, it is often hard to make sure your booth stands out.  IDG worked with one of the Anime Expo’s exhibitors to create a 10-foot-tall custom anime inflatable that was used as part of their booth design.

Comic-Con is another big event in the anime and video game industry.  This event takes place annually in San Diego and brings in over 130,000 attendees.  The over 700 exhibitors are from all over the entertainment industry including comics, games, film, and tv.

IDG has worked with many companies to help their tradeshow booths stand out at Comic-Con with custom anime and video game inflatables.

IDG worked with the artist-ran anime company BeKyoot to help bring their character Momocheet to life in the form of an inflatable replica.  This custom anime inflatable was 6 feet tall and had an internal blower, making it extremely easy to set up and transport.  It provided fans of the BeKyoot brand a fun photo opportunity and a way to connect with their favorite character on a more personal level.

As mentioned before, IDG has worked with many companies across the entertainment industry to create custom inflatables for Comic-Con.  These inflatables range from inflatable character replicas displayed by brand booths to giant inflatable activations displayed on buildings in downtown San Diego.

E3 stands for Electronic Entertainment Expo and is a trade event for the video game industry held in Los Angeles.  It is smaller than the other two events with around 70,000 attendees and around 250 exhibitors.

At E3 2018 IDG worked with Fortnite, a popular online multiplayer video game owned by Epic Games, to help create a fully immersive experience for event-goers.  This experience took place outside the main E3 event and brought the virtual world of Fortnite to life.  The event consisted of fun photo opportunities, game kiosks, food, and more.

These custom video game inflatables added to the event atmosphere and were a great way to help fully emerge event-goers into the world of Fortnite.  IDG has worked with many companies to bring other virtual props and cartoon characters to life with custom inflatables.

Learn more about the custom Fortnite inflatables on our website.

In addition to the custom anime and video game inflatables mentioned above, IDG has created custom inflatables for other events such as a Fortnite Pop-Up Restaurant that took place in Los Angeles in 2021.  These custom inflatables are a great way to connect with event-goers and attract people to your booth.

Please note that IDG’s current lead time is around 10 weeks.  Get started on your order today to ensure that your custom inflatable is in your hands before your event.  Email our team at info@inflatabledesigngroup.com for a free quote.