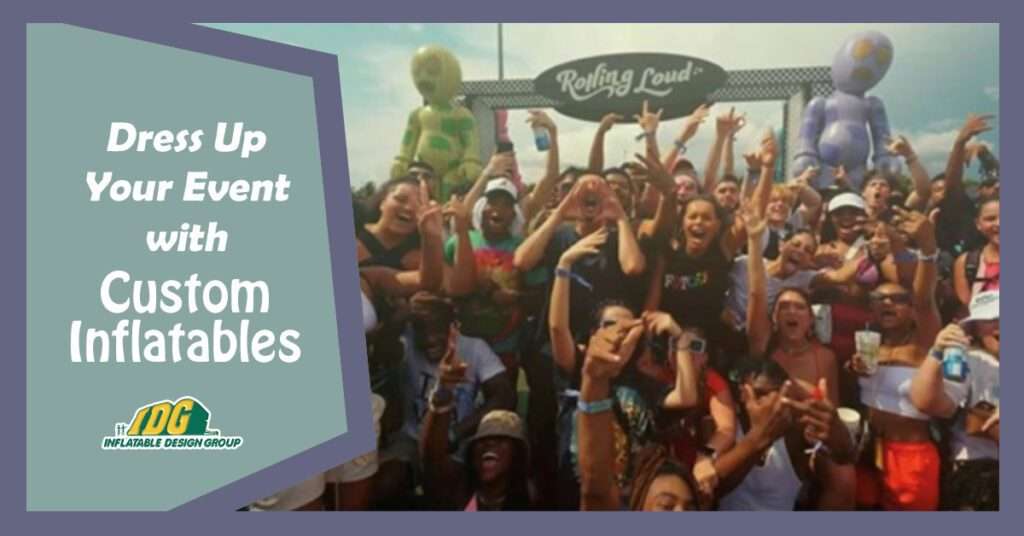 Custom Inflatables Dress Up Your Event

Rolling Loud, the largest hip-hop festival in the world, kicked off its 2021 festival tour in Miami from July 23rd to July 25th.  Musical artists may have been center stage, but custom inflatables added to the atmosphere and dressed up the event.

On Saturday popular rapper Don Toliver took the main stage at the Rolling Loud music festival.  With about 50 artists performing each day and less than 40 minutes allotted for his set, Don Toliver had to find a creative way to make his set not just a performance but a show.  How did he do it?  With custom inflatable props creating an eye-catching and easy set-up stage set.

Most of the time when performing at a music festival there is a very short amount of time between performances.  This makes it hard for artists to create cool stage sets and many times they are stuck using only digital screens.  Custom inflatables provide a solution to that since they require only a few minutes to set up and takedown.

With custom inflatable stage sets and props, artists like Don Toliver can create a show-stopping stage set and performance in their short set time.  They also can take their stage set and props on the road with them when they perform at other festivals around the world.

Check out other inflatable stage sets IDG has brought to life on our website.

Custom inflatable art sculptures are the perfect element to dress up events, such as music festivals.  They are portable and durable, allowing them to be used year after year.  Custom inflatables are fast and easy to set up and roll up small for storage.  Since they are lighter than most other elements used in art, they are cheaper to transport than traditional art exhibits.  This allows the custom inflatable art to travel with artists and festivals to different cities in the country or even internationally.

Custom inflatables are the perfect addition to any event, festival, or tour.  They are easy to set up, take down, store, and transport.  Plus, they dress up events and provide great photo opportunities!

Since custom inflatables are so durable, they can be used at the same event year after year.  Rolling Loud placed their custom inflatable art in different spots for their 2019 and 2021 festivals.

The music festival Forbidden Kingdom also reused their custom inflatable art at their festival.  During the 2019 festival, their inflatable dragon was the center of the festival’s stage.  This year, during the 2021 festival, the dragon was displayed in a different spot, providing a perfect photo opportunity for fans.

Custom inflatables take events to the next level.  IDG’s innovative team can make any inflatable dream a reality.  Get started on your custom inflatable stage set or art exhibit today!  Contact us at info@inflatabledesigngroup.com to get a quote.