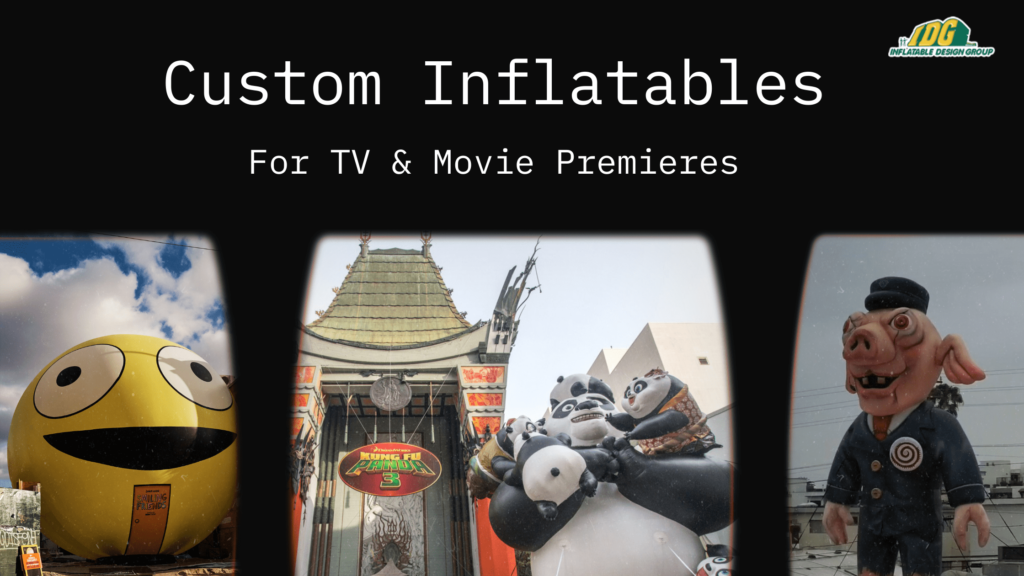 Looking for a creative and unique way to promote your new movie or tv show coming out soon?  Use custom inflatables to grab attention and create excitement for your premiere.

Inflatable Design Group has worked with many companies in the entertainment industry to create giant inflatable replicas that were used at premiere events or in other premiere marketing campaigns.

When it comes to creative marketing campaigns for tv show premieres Adult Swim takes the cake.  This past year IDG worked with the popular adult cartoon tv network to create custom inflatables for two of their new shows.

In June 2021, IDG created giant custom inflatable replicas of the title characters for the network’s new show Tuca & Bertie.  Two sets were made of these giant inflatables.  One went to Los Angeles while the other traveled across the country to New York City where they were displayed on giant barges and pulled along the coast.  Many people stopped and took pictures of this giant inflatable activation, posting them on social media and creating a buzz before the show’s premiere.

Read our case study on this inflatable marketing activation here.

More recently, IDG worked with Adult Swim to create giant custom inflatables for their new show Smiling Friends.  These inflatables were made to create buzz for the show’s HBO premiere which was on February 9th, 2022.  They popped up in 5 cities across the country and were displayed for about two weeks.

Both Adult Swim custom inflatable activations were successful in that they created a buzz for the shows’ premieres and pictures were posted all over social media, increasing the brand’s reach to people who did not see the inflatables in action.

The ninth film of the Saw series, named by Forbes as one of the highest-grossing horror franchises of all time, came out in 2021.  This was almost eleven years after the premiere of the eighth film.  To promote the movie premiere, Lionsgate worked with IDG to create an inflatable character replica of the film’s newest puppet, referred to as ‘Mr. Snuggles’.

This 25-foot-tall inflatable character replica was displayed during a pop-up activation on top of the Diamond Supply building in downtown Los Angeles.  It towered over the surrounding buildings and drew in crowds who were eager to welcome the franchise’s newest puppet.  Even the film’s director, Darren Bousman, made a trip to see the inflatable character and posted it on social media.

Overall, it was another successful movie premiere utilizing custom inflatables.

Both custom inflatable replicas helped bring the movies off the screen and into reality.

Whether it’s for a pre-premiere pop-up activation in the city or a red-carpet premiere event, IDG’s custom inflatables can be utilized to help promote any new show or movie.

IDG’s team boasts over 30 years of experience in the custom inflatable manufacturing industry.  We use the best 3D modeling programs and materials available so that all our custom inflatables are highly detailed, high quality, and long-lasting.

Our team can bring any design to life with custom inflatables.  Get started on your inflatable creation today by contacting us at info@inflatabledesigngroup.com