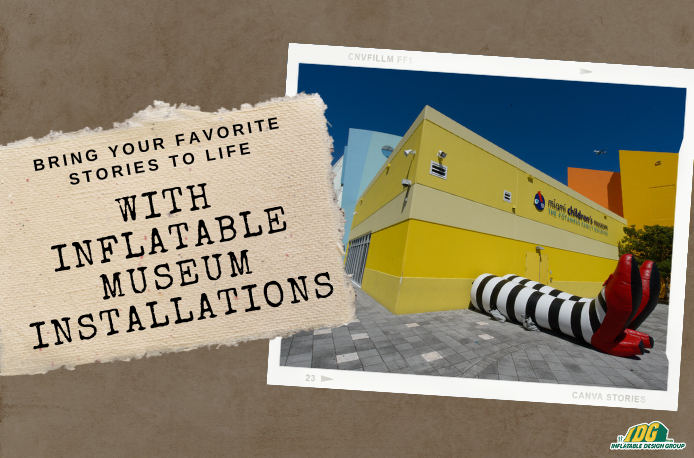 Bring Your Favorite Stories to Life with Inflatable Museum Installations

It doesn’t matter if you grew up fearing the Wicked Witch of the West or loving Curious George, Inflatable Design Group can help you bring your favorite stories and characters to life with custom inflatable museum installations.

There is No Place Like the Miami Children’s Museum

When people think about The Wizard of Oz many people envision the image of the Wicked Witch of the West being stuck under the house with the iconic ruby slippers on.  This scene is exactly how the Miami’s Children Museum welcomed their guests to their interactive The Wizard of OZ Children’s Educational Exhibit.

Overall, this fully immersive museum exhibit was a fun way for families to enter the magical world of one of their favorite stories and the inflatable witch legs helped bring the story to life.

Many people grew up reading “If You Give a Mouse a Cookie” by Laura Numeroff.  IDG worked with the Children’s Discovery Museum of San Jose to help bring the beloved childhood book to life for their ‘Storyland:  A Trip Through Childhood Favorites’ exhibit.

This giant inflatable museum installation not only brought the childhood story to life, but it also served as a fun photo opportunity and inspiration to kids to read more.

Another project IDG worked on with the Children’s Discovery Museum of San Jose was to create a giant inflatable replica of the beloved monkey, Curious George.

Curious George is another character many people grew up reading about and watching on tv.  The little monkey seems to always be getting into trouble and his friend, ‘The Man in the Yellow Hat’, is always coming to his rescue.  Curious George was originally published as a book in 1941 and was then turned into a tv show in 2006.

IDG has worked with companies of all sizes to create custom inflatables that have been displayed on their roofs to attract people to the businesses.  This is a great way to get eyes on your company and make your business stand out.

Mo Willems’ and The Pigeon

Another popular children’s book series is the Pigeon series written by Mo Willems.  The first book of the series, Don’t Let the Pigeon Drive the Bus!, was published in 2003 and there are currently about 10 books in the series.

Mo Willems is not only an author, but he is also an artist.  He illustrated all the Pigeon books and has been recognized at The Kennedy Center as the inaugural Kennedy Center Education Artist-in-Residence.  To celebrate Willems’ success, IDG worked with the Kennedy Center to bring his beloved Pigeon to life in the form of a giant 20-foot inflatable pigeon!

This giant inflatable pigeon makes occasional appearances at the top of the hill on The Kennedy Center’s lower lawn.  It is a great way to not only celebrate Mo Willems’ success as both an author and artist, but also to let people connect with the beloved Pigeon and bring the character, and story, to life!

Inflatable character replicas are a great way to bring your story, cartoon, or movie to life.  IDG has worked with many companies to bring their characters to life in the form of custom inflatables.  View more examples on our website.

Ready to get started on your custom inflatable museum installation?  Email us at info@Inflatabledesigngroup.com to get a free quote!