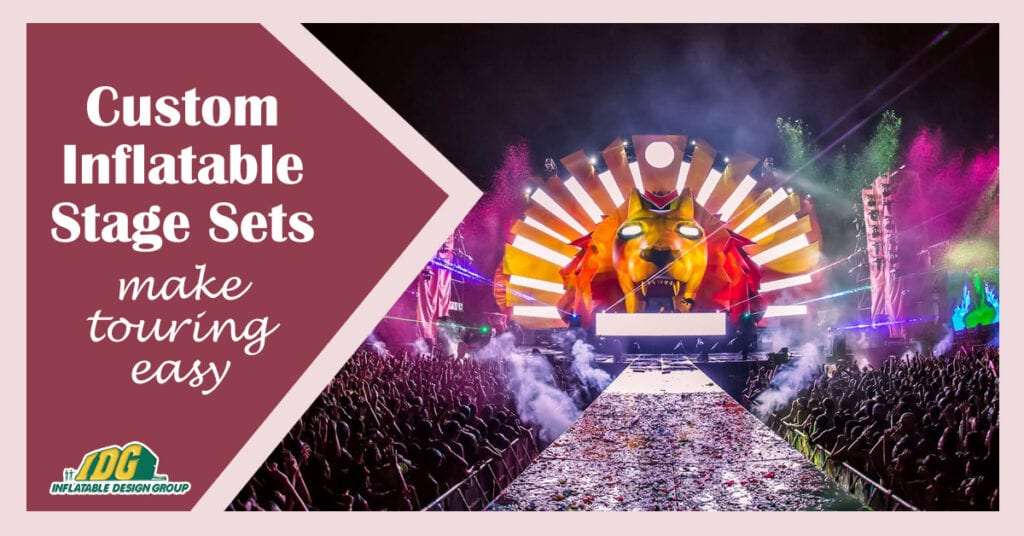 When going on a concert tour the problem many artists face is how to create an impressive yet practical stage set.  Since most artists perform in multiple cities around the world, they need a stage set that is easy to transport and set up.  That’s where Inflatable Design Group comes in.  Our custom inflatables make for the perfect stage sets or props and, since they are inflatable, they can easily be set up, stored, and transported!

Lots of thought and logistics go into the designing of concert stage sets.  They must be visually appealing to fans but also logistically easy to set up and transport.  Sometimes, the design of a stage set can even be the deciding factor on if a concert tour goes international or not.  If the stage set is heavy and takes up a lot of room in transportation, it may not be feasible for a tour to travel out of the country.

IDG’s team of skilled craftsmen can make your stage set visions a reality with custom inflatables.  The best part is that they are lighter than traditional materials used for stage sets and can be packed up small, making them easier and cheaper to transport wherever your tour takes you, whether international or not.

IDG has worked with a large array of musical artists in multiple genres to design their stage sets.  Our innovative team can turn anything into a custom inflatable stage set that is sure to set the atmosphere for your fans.  Whether you want to bring your album cover art to life like Foster the People did for their “Torches” tour or design a full inflatable stage set like Animal Collective’s stage for their Centipede Hz world tour, IDG can help you!

For example, IDG was approached by Life in Color event company to make a colorful inflatable for their EDM festival. Since the festival was taking place in over 31 cities worldwide, they needed something that could be transported easily and could be used again and again.  IDG worked with the Life in Color team to bring their theme of “Kingdom” to life with a giant, colorful lion inflatable.  This custom inflatable did not only serve as the main stage of the event but also was the flagship icon of the entire “Kingdom” themed festival.

Our team has also worked with the music festival Forbidden Kingdom to create a giant mythical dragon inflatable that is connected to the story of the festival.  This dragon peered at eventgoers over the festival’s main stage. It was fully equipped with lights and smoke to make it seem more realistic.  Many festivalgoers took pictures with it, posting them to social media and reaching a variety of people, even those not at the event.

Inflatable Stage Sets for Other Events

The Ideas are Endless

When it comes to the use of custom inflatables in stage sets the ideas are endless.  Whether you want small, sealed inflatable props for artists to walk around with or inflatable costumes for backup dancers, IDG’s inflatables are 100% customizable and made to your specifications.  Extra items, such as smoke and lights, can be added to truly wow your guests with a one-of-a-kind inflatable creation.

Inflatable Design Group has over 20 years of experience in crafting custom inflatables and exceeding customers’ expectations.  We have worked with artists such as Travis Scott, Bon Jovi, and Chris Brown, just to name a few.  We have also designed stage sets for companies such as Adult Swim.  Our team of talented craftsmen can take any idea and turn it into a custom inflatable for your next tour.

All our inflatables are made with the highest quality materials in the industry.  They are heavy-duty, can be used again and again, and can be transported all over the world.  Custom inflatables designed by IDG are the lightweight, portable alternative you need for your next world tour.

Get started on your inflatable stage set.  Contact us at info@inflatabledesigngroup.com to get started.

Already have an idea? Get a quote on your custom inflatable now.