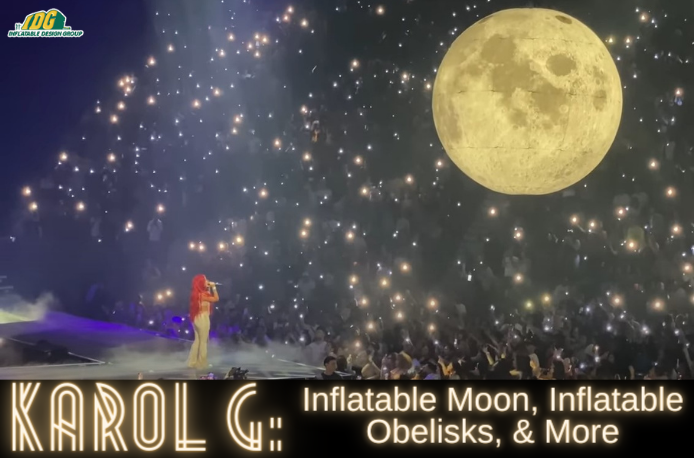 Karol G is a Colombian singer and songwriter.  She has multiple accolades including numerous Latin Grammy wins, and Latin Grammy nominations and her 2022 tour titled $trip Love was recently named the ‘Highest Grossing Us Tour by a Female Latin Act’ in history by Billboard.  Inflatable Design Group had the pleasure of working with her team to create custom inflatables, including a giant custom inflatable moon, used for her stage sets during her tour and performance at the Latin Grammys.

In 2022, Karol G went on a concert tour where she performed in arenas all over the United States.  The tour was titled $trip Love and IDG was lucky enough to create multiple inflatables for her stage design, including a custom inflatable moon.

Another great thing about using custom inflatables in your stage set is that they are very fast to inflate and deflate.  They can also be hooked up to timers and be inflated at a specific time during an artist’s performance.

The inflatable hearts were designed after the artist/songwriter’s arm tattoo which was also the opener of her album KG0516.

Karol G was nominated for 3 Grammys at the 2022 Latin Grammy Awards.  She also performed multiple songs including her new song “Cairo”.

After her Strip Love tour, IDG had the pleasure of working with the talented Karol G again in manufacturing custom inflatable obelisks for her stage set during her “Cairo” performance.

There were four inflatable obelisks, each covered in hieroglyphics.  Two of them were 22 feet tall while the other two were 26 feet tall.

Order Your Custom Inflatable Moon or Other Inflatables Today!