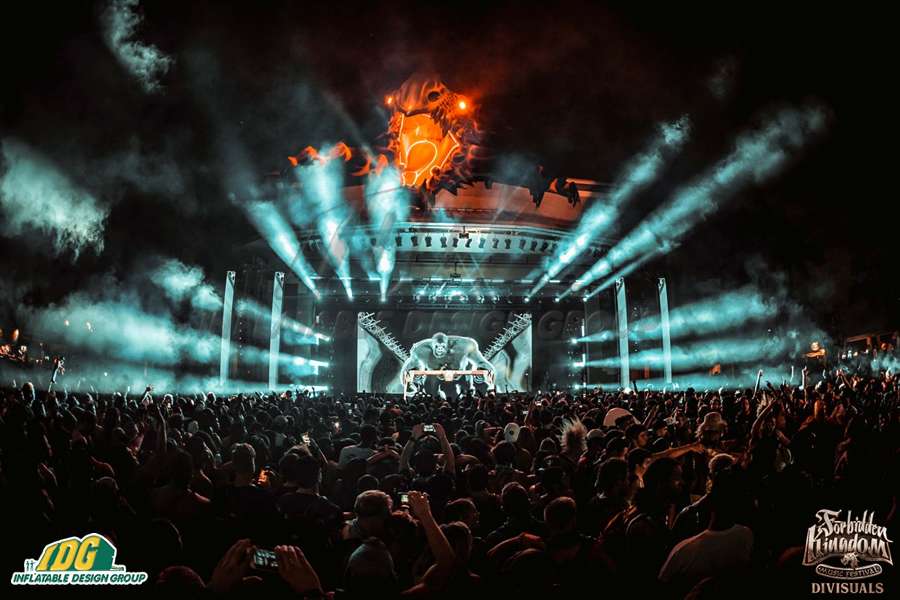 Summer is the time for concerts and good times. Make your concert the best time with a custom inflatable from IDG! Inflatable Design Group has created amazing inflatables for stage sets of concerts as well as huge music festivals. The artist or band’s vision comes to life with the customizability of each inflatable. From Foster the People‘s Inflatable Props to Travis Scott‘s Inflatable Head, IDG creates products and satisfies each client every time. Summertime is full of fun-seekers looking for the next event to turn into wonderful memories. What could be better to satisfy that desire than a summer concert with custom inflatables from IDG? Contact us today to get your concert to the next level!

In the weeks before Travis Scott’s highly anticipated Astroworld album dropped, IDG inflatables were utilized in attracting attention. Inflatable Design Group created multiple golden replicas of Travis Scott’s own head. Each inflatable head was about 17 feet tall and depicted Travis with his eyes and mouth open. The first inflatable was spotted on top of a popular music store called Amoeba Music in LA. As pictures of and with this inflatable head created a buzz in social media, fans found more heads appearing around the country. These locations included outside Minute Maid Park in Houston, Travis Scott’s hometown. On the Hard Rock Cafe in New York. Also, even on a barge floating through Sydney Harbour in AUSTRALIA!

The Travis Scott inflatable head went viral. Social media was on fire with everyone scrambling to find the next head to take pictures of and with it, some even made memes of it. The heads were a hit.

When social media grabs hold of your promotional campaign, you’ve won. Travis Scott and his team built the anticipation perfectly. IDG’s custom inflatables were an important part of this. Therefore, it’s a no-brainer that Inflatable Design Group is your go-to for promoting the next concert! The magic of inflatables is their portability, quality, and most importantly – they are very photogenic! People couldn’t help but take selfies with these giant golden Travis Scott head replicas, providing free advertising for the upcoming album. IDG is the key to build anticipation for your next concert!

The hype’s already been built. It’s now time for the big stage: the concert itself. Inflatable Design Group has the ability to bring your stage design to life! Whether it’s a giant lion face that stars the main stage of Life Is Beautiful 2016 music festival or custom characters that towered on each side of Foster the People‘s stage set, IDG makes it happen. The stage set and visual aspect of concerts these days have become increasingly more complex and impressive. It’s not enough to just have the performance – the stage set must be a spectacle that amazes the crowd. Each summer concert tries to out-do the next. So, make your stage the most eye-catching with custom inflatables from Inflatable Design Group!

The picture above exemplifies the “spectacle” that I referred to earlier. From the promotional inflatable heads to a giant inflatable astronaut as part of his stage set, IDG enhanced Travis Scott’s Astroworld tour.

Another example of going for gold with a stage set is the Forbidden Kingdom music festival. Forbidden Kingdom is a bass and dubstep music and arts festival held over a late February weekend in Florida. According to their website, the festival creates a story, a “Forbidden Tale” that paints a fantasy picture of the Forbidden Kingdom, complete with characters and a plot written by Joshua Dean Perry. The website provides a description of a major character – the dragon. “The Dragon is Forbidden Kingdom’s oldest and most powerful inhabitant. It lives to protect its life source and has the capacity to wield the mystical energy surrounding and upholding the Forbidden Kingdom, in its rawest and truest form” (forbiddenkingdomfest.com) IDG captured the essence of this dragon with an impressive inflatable that loomed above the crowd on top of the stage. The picture below is from the 2019 Forbidden Kingdom Festival.

In their 2012 tour, Foster the People utilized Inflatable Design Group’s resources to create characters that stood on each side of their stage. These characters exemplify the “custom” in “custom inflatables”. Take a look at the album cover for Foster the People’s 2011 album “Torches”. Two of the characters seen on the album cover came to life by IDG and stood over the crowd on their tour. “Foster the People’s drummer Mark Pontius explained that they wanted the characters that feature on the cover to be a motif throughout their music, the album and live shows” (Luther Codrington). Inflatable Design Group brought Mark Pontius’ wish to reality with custom inflatables. The characters provide a strong connection to the band, and that connection is established further when created in the form of larger-than-life inflatables and featured in the concert. Connect with your audience using custom inflatables. Contact IDG today!

Bonnaroo is another large festival that IDG has worked with. This time, the inflatable was on a smaller scale. IDG created a multicolored inflatable archway that stood over 10 feet tall and had the festival name, “Bonnaroo” written across the top. This archway stood over a popular walkway near the festival, serving as a perfect photo opportunity for fans to prove they were there. Following the common saying, “Pics or it didn’t happen”, this archway served as a designated group photo spot for festival-goers to post to Instagram, Twitter, and Facebook. Also, this shows that IDG can come through with not only large-scale custom inflatables, but with smaller inflatables. Our prices are fair for all products, but a less complex inflatable archway is a great way to fit your budget for this side of your concert.