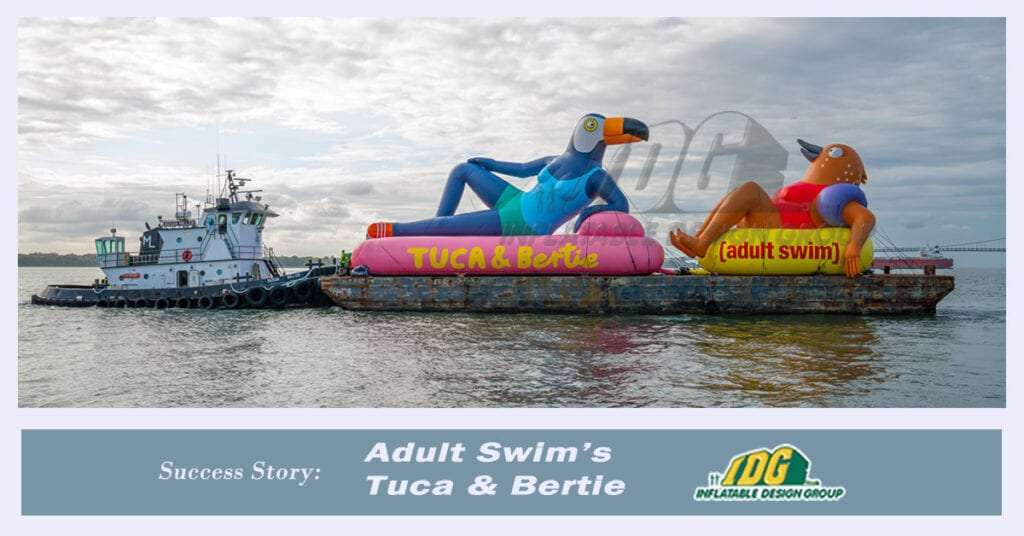 The creative agency Hitch Experiential is known for their unconventional experiential campaign and activations.  Adult Swim approached them to create an innovative marketing campaign for their new animated show, Tuca & Bertie, which was named one of Indiewire’s “Most Anticipated TV shows of 2021”.  Hitch Experiential, in turn, asked the Inflatable Design Group team to bring their vision to life with custom inflatables.

Adult Swim picked up the animated series Tuca & Bertie from Netflix after the streaming service canceled the show in 2019.  After two years of anticipation, the animated show’s second season premiered on its new network on June 13th.  Wanting to promote the show in a big way that was sure to get people’s attention, Adult Swim approached Hitch Experiential, who is no stranger to unconventional experiential campaigns and activations.   Hitch Experiential, in turn, asked Inflatable Design Group to bring their vision to life with custom inflatables.

If an agency creates an epic experience and it’s not ALL OVER social media… did it really happen?

Hitch Experiential worked with the Inflatable Design Group team to take Adult Swim’s show from the screen to reality with giant custom inflatables of the show’s title characters, the anthropomorphic birds Tuca and Bertie.

Now this is how you advertise a show!

The giant custom inflatables were hard to miss, and Hitch Experiential accomplished their client’s goals.  Tons of pictures were taken and posted to social media, increasing the show’s reach and awareness.  Hitch Experiential’s client was happy and most importantly, the public could not stop talking and posting about the giant inflatable birds floating through the New York Harbor.  Even people who had never heard about Tuca & Bertie were mesmerized by the floating activation.

I don’t even watch this show and this excites me